The only thing missing is the kitchen sink! 15g per scoop and a lot of ingredients.

Well dosed across most ingredients!

It had the noteable peppery taste, but you could defnitely feel it working.

A well dosed, high stim pre workout that comes in at the higher end of premium pre-workouts. Defnitely one worth trying if you get the chance.

I had never heard of MaxxMuscle (other than a brand of a quite similair name that you find in the cheap bin at Tesco) and I first heard of them after I was raving about a pre workout I was trying at the time to some random dude in the gym and he pulled out this tub of Atomic Bomb.

Ever since he showed me the cool branding and mentioning how he had become a demi-god, I knew I had to try it.

And finally, I managed to get a sample of it from the guys at SupplementNeeds (we where actually picking up StromSports new flavoured non-stim pre workout, the same ones that do the StimuMax Pro)

So,  it's time to crack on with this Atomic Bomb review and find out if this product is a nuke or a more of a damp squib?

You are going to want to take a deep breath.

In total there are 19 different listed ingredients within this pre workout, and it's going to make this review huge.

I am all for companies giving all of their ingredients on the labels, but including the vitamins feels a bit over kill. I shouldn't get annoyed though, because they are being super transparent.

As I said, you get 19 active ingredients, smashed into a 15g serving, this might turn out quite good!

​To ensure that this review isn't 5,000 words long, I will try and hit the main ingredients, and some of the more 'odd' ones that you get with this pre workout.

Starting off this shopping list of ingredients is the staple of both stim and non stim pre workouts, our friend Beta Alanine. You know, that one ingredient that makes you feel like a meth addict!

Studies have shown that 3,200+ mg is the clinical dose. I am actually going to give them this one, as I found a few articles noting that 3,000+ is actually a good start, so for the want of 10% in difference, have it lads.
Glycerol (Hydromax & Monostearate)

Used as a re-hydration ingredient, glycerol will help with replacing water and minerals back to muscle as you smash through your workouts.

Can actually be used on it's own, and has been known as one of those 'secret underground pre workout' ingredients (think those awful tasting re-hydration packs you get in boots or chemists).

Both types of Citrulline are usually used to help with blood flow and elevating your nitric oxide levels, again another staple when it comes to pre workouts with high amounts of caffeine or any ingredients that restrict blood flow.

Personally, I am not a fan of Creatine in pre workouts, as its effects are built up over time after building up the creatine levels within your muscles.

Yes studies have shown that creatine is useful and does help with short term or high intensity workouts, but again after you have been taking it for a while.

2,500 mg is below the recommend dosage per day anyway, so looks to have been used as a top up, but really not needed.

Also used as a nervous system suppressant (removing that jittery feeling for you).

Some studies recommend that 1,000 mg is around the correct dosage.

As with the Strom Sports StimmuMax, this MaxxMuscle Atomic bomb looks to use some of the same ingredient profiles, though this is coming in at 1/2 the dose.

N-Acetyle -L-Tyrosine is usually sold as a 'concentration' supplement that may help influence adrenaline and dopamine in your brain.

As with StimmuMax there is still at least one study that reckoned having L-Tyrosine didn't actually help as a precursor for amino acids.

One ingredient that you wont find that often, but is becoming more popular.

From the research and from the few people I have spoken too, it's added to help with inflammation, allowing you to carry on your workouts for a little longer.

It's one of those ingredients that I will be following and getting more info on in the coming weeks.

Usually used as an appetite suppresent, with some suggesting orange peel and bitter orange peel may be the new Ephedra, we will keep our eyes peeled on this one...

This one may sound familiar if you have ever tried one of our highest rated (well, apart from taste) pre workouts we have ever had, Alpha Darkside.

This is what I originally wrote for that review

"Kigelia Africana is currently being added too a few, select pre workouts. The actual extract is taken from a Kigelia tree, surprisingly found in Africa!  So what is this stuff?Well, it's actually the natural version of 'DMHA' the slightly hazy, little sister of DMAA.
If you have had synthetic DMAA or DMHA (before it was removed from our lives..) then you will know it will hit you like a ten ton truck.
Welcome to the ten ton trucks big brother, the natural version, this stuff is the real deal and holy mother of sweet baby jesus, it hits you hard.Smacking 250mg of this legal dynamite, this is twice the amount that most DMAA or DMHA pre workouts have in them, and it's been reported it could potentially be twice as potent. So you do the maths."

Now, this pre workout only contains 150mg of this lethal little fruit extract, but seriously that is more than enough!

150mg dose of Caffeine allows you to double scoop!

Kidding, do not double scoop this, the Kigelia would be a bit unconfortable at a 300mg rate.

Caffeine is again a staple of stimulant pre workouts, as it's the ingredient that gives you that energy and alert feeling that we have all come to love!

The rest of the ingredients either provide some natural energy, or allow for quicker absorption allowing those ingredients to get to work quicker. Aside from MUIRA PUAMA which is usually used to help with shall I say, 'wood' issues there isn't a huge amount to add.

A pre workout that you would or should class as a true 'stim' product. With a decent level of Kigelia (being the main stim) as well as good doses of other key ingredients, it's a good mix.

This was never going to be cheap, due to the large scoop sizes and the ingredients profile.

As with most pre workouts, Atomic Bomb will set you back £39.99 for 30 servings.

So giving you £1.30 a serving. Considering it costs the same to get products like Kraken which requires two scoops to even come close to decent levels, then I would say £1.30 for a product that doesn't need two scoops is good.

Considering you don't need to give this 2 scoops, it's not a bad price and is slightly more expensive that the majority of pre workouts.

As with other pre workouts I have been having at the moment, I got the 'Cherry' flavour.

Again, as with the Scitec Pow3rd the taste, was ok.

It had a bit of a peppery flavour too it, and at times a strange taste that would linger. I wouldn't say it was the best tasting pre workout, but it's not the worse.

But,lets talk about the part you have all come here to read.

It was alright, I definitely felt that I had taken a hard hitting pre workout, and I could feel that slightly euphoric feeling that you get from the Africana.

It was definitely allowing me to push myself that little bit extra in the gym, which is exactly what you need when taking a pre workout, but one of the best parts is, the crash just didn't happen.

With others I sometimes feel like someone has thrown a stop sign with me, and I just crumple for about 2 or 3 hours and feel a little awful. This didn't.

As a note, it's worth noting that I had not had a break from pre workouts for a while, so the tolerance at this point was quite high, so I definitely want to try again with a 'fresh body'.

You could tell it was working, though the taste was not the best.

I would say that this is a product that you want to give a try, it's worth it for the ingredients profile alone.

If you are looking for something a little more 'stimmy' than you usual pre workout, then you cannot go wrong with Atomic Bomb. and I would rank it alongside DarkSide. 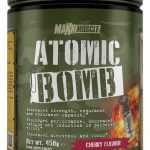