A decent variety of ingredients, from proven heavy hitters to some of the new interesting nootropics that have started to appear.

All the active ingredients have a full dose.

Pretty decent, considering the ingredients and what you get inside of Bring The Chaos

The taste is not for me, it just tasted of chemicals and 'yuck'. But the feel bring it back up and saves the day. You can feel this stuck kick in.

A diamond in the rough, considering we grabbed this as a filler while we waited for a different pre workout to arrive. Pleasantly surprised with the effects and how well dosed it was. If you are in need of a well priced, well dosed pre workout that does what it says on the tin, then worth grabbing.

Get Bring The Chaos

It's been a slow year for pre-workout reviews, and even slower for actually seeing new pre workout coming to the market. With the fun that is delivery drivers, around 20% of the pre workouts we ordered or where being sent got lost, delivered to a different house or somehow a different part of the country entirely.

But, we managed to get back to testing some new pre workouts, most notably one of the 'high stim' offerings that Amazon seem to stock, which is pretty rare.

Today we will be trying and reviewing Chaos Crews' 'Bring The Chaos', the new improved flavour version. As usually we will dive into the ingredients, pricing and finally the overall taste and feel that this product gave us.

A trend that we came to notice when picking up products from sites such as Amazon, is that they usually came with prop blends, or where half prop blends and then caffeine, or some mixture of the two.

With Bring The Chaos, we found that not to be the case, it actually has a each ingredient listed out, with the dosages. Makes our life easier, plus it means people can actually see what raw ingredients they are buying, and if the dosage is correct.

There are 12 active ingredients listed, so quite a few to dive into.

Both types of Citrulline are usually used to help with blood flow and elevating your nitric oxide levels, again another staple when it comes to pre workouts with high amounts of caffeine or any ingredients that restrict blood flow.

The fight between L-Citrulline and Citrulline Malate will rage on forever more,

The ingredient that makes people feel like 1,000 tiny ants are crawling over your skin, and a personal favourite of Stim Junkies.

Studies have shown that 3,200+ mg is the clinical dose, so they are spot on the money with this dosage.

Many of the pre workouts found on Stim Junkies enjoy using this ingredient, added to pre workouts to help with alertness, as well as increasing stamina and general performance.

Top end of recommended dosage, with some studies suggesting 500mg is the optimal dosage, so again well done guys.

Used as a way of increasing feelings of 'calm' and 'focus'. An increasing number of companies are now introducing L-Theanine into their formulas, as their is a small amount of evidence that it becomes more effective when combined with caffeine.

For an 'extreme' pre workout, the 250mg they have put into this, would be seen as quite low compared to something like Black Blood, but I think most manufacturers have worked out that reducing the dosage, but including other stimulant ingredients (at a higher cost) can be much more effective.

Lower doses does mean that a user won't crash as much after, or allows someone to include slightly more than 1 scoop, though really I don't think it would be required here.

A multi use fruit, the Cupuacu fruit contains a number of potentially useful ingredients, though the guess is that it was used as a mood enhancer in pre workout.

Note - In the later batches we have seen, this ingredients has now been swapped out for Eria Jarenis (So we probably have a slightly older batch). Eria Jarenis is quite similar in effects as DMMA or AMP-Citrate, providing a boost in your overal mood, increasing your dopamine levels.

Definitely need to try some of the new stuff. Usually used as another natural ingredient to help with circulation.

Currently no recommended dosage exists, with some studies using 50 mg with others going as high as 400 - 500 mg.

More research is needed for this.

Another extract, Juglans has been shown to boost dopamine within the body, also providing energy without the impending doom of the caffeine crash.

We couldn't find any reliable information about the effects of Lotus Leaf Extract, other than one study suggesting it may be useful to use with L-Cartanine. Guess we will have to come back to this one day.

It has been noted it may increase energy, mood and again focus.

And finally, good ol' Piperine, or Black Pepper Extract. This ingredient is used to help with the absorption of all the others.

With 15 grams of active ingredients, and some great dosages. Chaos seem to have created a pretty decent pre workout.

Each tub of Bring The Chaos pre workout provides you with 25 servings, and that's not one of those 'we have 40 servings, but you need 2 scoops to make it worth it..so really 20 servings'.

They are 25 full scoops worth of pre workout.

These days, paying £30 for a tub that will last you 1 or 2 months depending on how much you smash in a month. You get a decent number of well dosed ingredients for the price.

How Does It Taste And Feel

I have no clue why, but I went for the Bring The Chaos Sour Gummy flavour. It might have been because it was the only one left in stock. I regret it.

The taste isn't that sour, but it is quite chemically. It does make it a chore to drink, usually meaning every time I had it, I would just have around 50 - 100m of water. It means you can shot it back without having to keep drinking it.

But, the actual feel, the part that matters, is great.

It can take around 20minutes to kick in, once it took nearly 45mins to start feeling anything, but you do feel it. There is that feeling of euphoria that will slowly start to take over, before you become 'focused'.

I found that it would only last around 1 - 2 hours before it kind of just stopped. I didn't crash, I just stopped having

The taste was pretty shit, but the actual feel and effects are there. Focus and energy are provided in abundance, and there is a general uplifting of your mood after around 20 minutes or so.

Considering we came across this while searching for items on Amazon as we needed something quickly before gyms re-opened, I was pleasantly surprised with Bring The Chaos, kind of like a diamond in the rough.

It was well priced, not quite as expensive as Atomic Bomb, but more expensive than Black Blood, it's pretty much bang in the middle of pre workout pricing these days.

Bring The Chaos is a decent pre workout, that can be grabbed at short notice, just don't go for Sour Gummy, get something that has a little more... flavour. 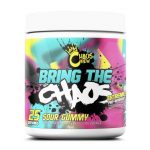 Get Bring The chaos