Two separate blends within this particular pre workout, and usually I am not a fan of blends. But, they do offer a breakdown of what is inside those blends.  The ingredients profile itself is pretty good, with some decent ingredients such as Taurine, Caffeine and Citrulline as well as the NADH and Rauwolfia that adds a little bit of an extra boost to this particular supplement.

Most of the doses within this pre workout are either properly dosed, or slightly under such as the Beta Alanine. A shame that they don't bump up some of the doses to their clinical dosages.

It's expensive for what is it. Partly due to the brand name (it's like buying a coke vs a pepsi..). You can pay up to £2 a serving on occasion and even more if you double dose.

For me, it was a double dose pre workout, the first few sessions on 1 - 1.5 scoops did very little.

It feels like you are paying a premium for the name. The actual pre workout isn't bad and you do get some good ingredients and doses, but you can pay the same or less for better pre workouts on the market. Definitely worth trying at least once.

When it comes to reviewing pre-workouts, there was always one that was going to catch my attention, why?

Because they flood my personal Instagram account pretty much every day with either products, random girls in leggings or food.

Yeah, no clue why, but they seem to class themselves a lifestyle brand, not a supplement company.

Sure, whatever pays the electricity I guess.

Right, let's get on with this Ghost Legend review.

For this one, I grabbed myself the WarHeads Watermelon Flavour, as it was the only flavour they had in their UK site (about 20minutes before the whole thing crashed and went silent for a month!)

So, Ghost Legend is comprised of two blends (unlike prop blends they have actually said what's in their doses, so that's nice).

Each Scoop is 12g and is comprised of 2 blends

Let's start with looking at the Ghost Legend blend, as that's the bigger dose out of the two of the blends.

First up,  L-Citrulline (4grams of the stuff) one of the most used stimuluents used within pre-workouts, this and the other version Citrulline Malate have both been shown to increased your nitric oxide and enhancing your blood flow - Massively needed if you are having high doses of caffeine.

Next up is the 2grams of Beta Alanine (not the highest dose I have seen in pre workouts). Beta Alanine has been linked to removing lactic acid, as well as extending how long it takes for you to become exhausted. Unless you are used to Beta Alanine, you will get a lovely tingling feeling (think of ants..over your body). Studies have shown that 3,200+ mg is the clinical dose, so a little under-dosed in this aspect, but it does work well with the next ingredient to give you nearly the minimum clinical dose.

You then have 500mg of Afminate Sulfate (again not the highest dose), another 'pump enhancer' it has been shown to work well with L-Citrulline / Citrulline Malate to increase nitrix ocide.

Finally for the Ghost Legend Blend, you have 100mg of Norvaline.  The last of the BCAAs contained in this pre workout,  giving you an increase in circulation and cardiovascular efficiency.

First up, you have 1,000mg of Taurine (pretty much a staple in pre-workouts), hitting right on the bottom end of clinical dosages, Taurine works synergestically with caffeine. Helping to improve flood flow and helping to bring nutrients towards your muscle, as well as bringing on a 'sense of well being'.

Caffeine is found in two forms within Ghost Legend, 165mg Anhydrous +37mg from Di-Caffeine Malate.  This is not a 'high stim' dose by any stretch, but 200mg is pretty decent, and allows you to double scoop if you want too, without feeling jitty as hell.  Supplement companies have started to realise that throwing in tons of caffeine doesn't make a good pre workout. The Di-Caffeine is great for those who have weaker stomachs!

150mg of Alpha GPC is next on the list, the clinical dosage is meant to be 250mg+ to be clinically dosed, so a little low. Aplha GPC is used to increasing your neurotransmitter levels.

We are getting onto the smaller doses now.

Onto the 100mg of Rhodiola, actually a root extract, though not a lot of studies have been conducted, it's been suggested that it may help increase focus and energy, as well as possibly reducing stress levels (not really proven though). So far, there is no optimal dosage.

Finally, you have the NADH & Rauwolfia,  both adding the 'last bit of energy' into this mix. Not a large amount of studies available for these, but quite small doses. It is suggested that 5 - 10mg of NDH is optimal, so a little under-dosed.

I do have to give credit to Ghost for actually providing dosages for their ingredients though, so many companies like to hide their dosages and just blend everything together.

Not bad to be fair, some well dosed ingredients, nothing too hard hitting and nothing that will blow your mind. With 8 grams of active ingredients, its a little on the low side.

If you want a little more kick to your pre workouts, then you are going to be paying £1.10 - £2 per serving.

For the price, there are better ones that you could look at to be honest.

As with the ingredients, it's not a bad price, and price per serving is ok, but there is better out there and for cheaper.

How Does It Feel & Taste?

Feeling and taste is always subjective, and based on opinon.

How it makes me feel during a workout, isn't going to be the same as you. But, it's good to get a general idea.

First off, the flavour is quite good. As I said, I had the WarHeads Watermelon, and it tasted a lot like other watermelon flavours I had had. I couldn't say it tasted exactly like Warheads, just generic watermelon. But I didn't throw up or spit it right out, so that's always a good start.

I started off with the good ol' one scoop.

I was about 30 mins into a workout, there was no rush of blood, there was no slightly hazy feeling letting me know anything had kicked in.

For my next workout 2days later, I upped it to 1.5 scoops, due to the lower caffeine content, it worked out to be about 350mg, so not massively high, especially if you are a bit of a stim junkie (I also don't have other caffeine drinks or anything for the rest of the day, so it's used as my perk-at-work!)

This time, I did get the feeling that things where kicking in. A definite sense that blood was start to flow nicely and I wasn't getting any lactic  acid build up.

I ended up taking 2scoops every workout until I ran out of the tub, and that seemed to be the right spot for me.

Bit of a theme, but again it was alright. Nothing spectacular. Nice flavour, and OK results

Due to how Ghost market themselves, and the HUGE cult following they have, I am probably going to fall into quite a small camp  when I say that this Pre Workout is basically, ok.

This product is obviously designed to appeal to the mass market, as apposed to the high stim junkies and is very much aimed at the general gym goer who needs a bit of a boost and doesn't regularly take pre workouts.

They have packed the pre workout with a lot of well dosed ingredients, though most of the time hitting the bottom end of the proposed dosages, and for a few of the ingredients well below the recommended dose, and considering the price, they could have afforded to add a little more.

For me, this pre workout is alright. If someone gave me a tub for free, or if it was on some crazy discount, I would probably pick it up again just to give myself some switch up, but I wouldn't go out of my way to buy it again. 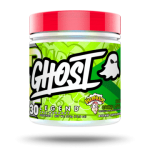