It has a small dose of Caffeine

Ugh, they didn't even get Creatine dosed correctly.

Atlantis wants their sea scrolls back..where did this favour come from?

Welcome to the dark ages when ON decided they couldn't be bothered to actually make a decent product.

I honestly thought, that this day would never come. I always envisioned that this blog would just look at high stim pre-workouts and that would be it.  Unfortunately the time has come to do a ON Gold Standard Pre Workout Review.

Fine I will stop being dramatic, but seriously, people actively search to see if this product is any good.

This formula was created around the same time that man was discovering fire, so it may not come as a surprise that this product is not going to contain what we would call 'properly dosed' ingredients, but I will stop spoiling the fun.

Well, that was a rollercoaster of emotions!

Definitely can't wait to get that grapefruit flavoid inside me so that I can go smash my workout.

From the looks of it, it all looks to be properly dosed and we can all go home and have a quiet cup of tea.

I recently reviewed another pre workout that was ranked one of the best on Amazon, it's first ingredient.

Creatine takes time to properly become effective and isn't just something you throw in a pre workout that you may have a few times a week.

Take your 5 grams everyday, and you will be pucker.

The next few technically fall under the 'Amino Acid' ingredients header, but what is the point other than having a little buzzword.

1.5 grams is not going to be touching the sides. You want to be hitting around the 3 - 3.5gram mark.

Citrulline is usually used to help with blood flow and elevating your nitric oxide levels.

As with the Beta Alanine, you will be wanting to hit around the 4 - 4.5 grams per dose.

First of the two Acetyl's found within

Another amino acid, L-cartinine is sometimes used as a stand alone product to help with fat loss, usually due to its's ability to increase energy.

Usually sold as a 'concentration' supplement that may help influence adrenaline and dopamine in your brain.

Still only have this one study that reckoned having L-Tyrosine may help, so this is still up for debate.

Next up is old faithful, Caffeine.

Dosed at a moderate 175mg, or slightly more than your standard sized Monster, this is not going to be keeping you up at night.

Unless you have never had caffeine or are somehow highly affected by it, if so, maybe don't read this blog?

It's going to be a double scoop for those who are less sensitive to caffeine.

I got so excited when I read this.

I thought that ON had found a secret ingredient that pushed this pre workout beyond anything that I had ever found before.

Nope, anti-inflammatory (maybe)  that can work with Vitamin C (not found in here).

It made me chuckle at least.

We have reached our final ingredient!

Notoginseng, or ginseng to us commoners, great for reducing blood pressure, so can be used as a way of countering some of the affects of caffeine.

There is a small amount of evidence that it will help, but not alot.

Literally nothing is dosed correctly. Not even the creatine.

As with a few pre workouts at the moment, it depends on when you get this product will determine how much you pay for it.

At the time of writing this Gold Standard review the price was £16.95, so I will use that as the baseline.

Though if you want to have any affect it will actually cost you £1.12+.

I did point out recently you can buy  200 Caffeine tablets for £11.50 that offer the same amount of Caffeine, without having to bother with the other stuff.

It's cheap, but so are those Caffeine tablets and they have more caffeine.

I decided to go out and try something different for this one.

I wish I had gone for something more sensible. The taste is like someone heard what a watermelon should taste like, from someone who had Google translated the scroll containing the long lost dead language of Atlantis.

I had more adrenaline running through me when I realised I had wasted £16 and a workout.

This product should have stayed in the dark ages where it belongs.

It has ingredients and doses from when people didn't do scientific studies and just threw in some random ingredients.

In this day and age, there are more pre workouts than there is craft beer (my second favourite hobby) and you need to stand out.

This has well and truly rested upon it's laurels.

Be sure to check out some of the other reviews to get a few ideas on products to get! 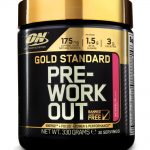 Get ON Gold Standard