A good profile, with a number of supposedly useful ingredients, including caffeine, beta alanine and 2-Aminioisoheptane.

As with the ingredient profile, the dosages in this pre workout are pretty much all ' properly' dosed.

It tasted nice, but it did nothing. After the full month of using it, all 30 servings, including double dipping and even taking a few weeks without caffeine to 'reset the body' it did nothing.

A well dosed, well priced pre-workout with a number of interesting ingredients, that sadly doesn't deliver. Perhaps I got a dodgy tub and it was just some flavourings and BCAA's or the dosages aren't true. We haven't analysed it, and we couldn't possibly comment.

Muscle Rage is another one of the new guys on the block (or at least they where when we got around to testing out the Limitless Pre Workout).

They are not so much these days!

We picked this pre workout up near the start of the year (April to be precise), Muscle Rage has now updated the ingredients profile for this product, so we will re-review when we get our hands on the updated Limitless.

With 8 different ingredients, and 30 servings per tub, it's time to actually get into this review and see if stuff really is Limitless!

Quick Navigation
Ingredients - What's Inside?
Pricing (Plus Price Per Serving)
How Does It Taste & Feel

Limitless is made up of 8 core ingredients, designed to pump, focus and energise your workout, to give you a completely limitless workout, but at only 11.5 grams per serving, can this really provide you with clinically dosed servings, or have they just stuff it full of lots of cool sounding ingredients, without caring for the totals.

So there you have your ingredients profile for Limitless pre workout.

Citrulline Malate have both been shown to increased your Nitric Oxide and enhancing your blood flow - Massively needed if you are having high doses of Caffeine.

6,000mg is classed as the full clinical dose, so hats off to Muscle Rage for this.

Following on from those two, you have we find ourselves looking at a 250mg dose of Caffeine (in Anhydrous format). Caffeine is again a staple of stimulant pre workouts, as it's the ingredient that gives you that energy and alert feeling that we have all come to love!

We have actually started to favour the pre workouts that dose themselves with a slightly smaller amount of caffeine, as it does allow you to take a cheeky two scoop hit without having 1,000mg of caffeine smashing around your body, as that never ends well.

Being added alongside these staples, is L-Norvaline, classed as a BCAA this ingredient  has shown to provide some increase in circulation and cardiovascular efficiency. Dosage information looks to be scarce on this, we have seen as low as 100mg (We are looking at you Ghost Legend) so it's fair to say a 250mg dose isn't bad.

Now for the list of ingredients that are hard to type and even harder to say! Your 175 mg of 2-Aminioisoheptane is one of the many chemicals that have been introduced and concocted to provide the same affects as DMAA (think the Africana root or AMP Nitrate found in other pre workouts). This chemical is as far as we can tell banned (though it wasn't when we purchased Limitless and it has now been removed).  This ingredient is meant to mimic that high stim, focus like energy (for short periods of time) that DMAA used to provide. Dosage amounts really do vary on this one, so we wont try to speculate here.

Next up you have 50 mg of Higenamine and Hordernine (similar to bitter orange) have both been found to increase heart rate and been shown to influence your central nervous system. If you are in a power lifting or weight lifting leagues or you are routinely drug tested, try not too take them, they are banned.

Both ingredients are short acting, so perfect for that quick rush of energy that you see from other similar stimulants.

Neither of them have been tested enough to provide evidence on dosage, but there does seem to be enough evidence to prove they work, or at least enough to get them banned!

Both have been removed from the newest version of limitless.

And finally, good ol' Piperine, or Black Pepper Extract. This ingredient is used to help with the absorption of all the others.

A well dosed set of ingredients. It could have been a solid run of the mill pre workout without the need for the 2-amino or Hige and Hord, but they are there too add stim.

This seems to be the standard for pre workouts these days, especially for 30 servings, with a few costing a bit more, and even fewer costing any less.

Considering the clinical dosage of some of the ingredients, we would class that as a decent price.

It's a good price for a pre workout.

How Does It Taste & Feel

Now, right off the bat, this is where Limitless was let down, and to their credit Muscle Rage has admitted it and reformulated it (though that may have also been down to the fact 3 of their ingredients can no longer be used).

At the time, this pre workout did nothing.

We couldn't tell if it was a dud batch, but it really didn't pull any punches.

The tell tale sign of Beta Alanine would kinda kick in, but that was it.

We would still fatigue at a normal rate and there was no obvious 'I have just taken DMAA like substance' feeling.

And that was frustrating.

The ingredients profile had a decent level of stimulants and known chemicals that should have worked, but we really got a little more than we would have done with a standard run of the mill pre workout or even an energy drink.

The upside, the taste was nice!

As stated above, this has now been reformulated, so it suggest Muscle Rage realised that something just didn't hit right with this combination of ingredients.

It did taste nice.

We came into this MuscleRage Limitless review with high hopes. It had a good ingredients list, with some unknown or slightly less stimulants, that sounded and looked good.

But ultimately it failed to deliver and it was more limiting than limitless. It felt like we had been given the blue pill and it had all just ended.

We look forward to retrying this pre workout in the future and see if they have managed to claw this back. 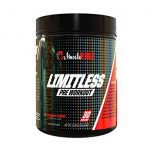