Nothing that exciting and to be fair, not a true 'high stim' product.

Under dosed or barely dosed, there is nothing special here

It's cheap, but there is a reason for that.

A cheap pre workout with an under dose of Beta Alanine and an ok dose of caffeine. Probably not worth throwing in your gym bag as a back up, unless you want a cheap caffeine hit.

Scitec Nutrtion is one of those brands that you see around, hiding in some supplement sotres, but never really thrown at you.

I have been told by a local supplement company that specialises in selling their products ,(The guys are called TopSupplement) that Scitec is sold a lot more on the continent than in the UK.

I have tried a number of their products over the years, including their whey protien and even a few of their pre workouts, though it's been a while hence why currently there are no reviews. I have to admit, I have enjoyed some, and then felt fairly indifferent about others.

This pre workout is marketed as;

POW3RD! 2.0 is a sophisticated, proprietary pre-workout support formula with 10 carefully selected active ingredients. You really cannot know what it could do for you until you try it!

At least they didn't claim it was the best pre workout on the market and that every other pre workout sucked, so it's a start.

I guess it's time to see if that is the case and kraken with this review.

First off, I hate proprietary blends, it's an old way of hiding the dosage of ingredients by just saying you had a prop blend of XX grams and it contained XYZ. It's just sneaky.

These days less brands do it, and the ones that do try and claim what the active ingredients contain, so a little better.

You are given 7 grams of core ingredients for this, with 7 different ingredients, or 8 if you include the two different types of creatine.

It's fairly obvious that this pre workout isn't going to fall under what I would call 'clincally dosed' just by looking at the fact it's 7 grams in total.

Personally, I am not a fan of creatine in pre workouts, as its effects are built up over time after building up the creatine levels within your muscles.

Yes studies have shown that creatine is useful and does help with short term or high intensity workouts, but again after you have been taking it for a while.

So the first ingredient that is found in the Sp3cial Blend, is Beta Alanine.

Studies have shown that 3,200+ mg is the clinical dose. We have 1/3 of the dose that has been shown to be effective. I think we are going to be following a theme.

The first of the two different types of L-Arganine in this pre workout, L-Arginine (HCL) s a synthetically manufactured form of arginine that combines the amino acid with a hydrogen chloride molecule. Used in pre-workouts to increase the oxygen delivery and blood flow through the body.

Following on from those two, you have we find ourselves looking at a 250mg dose of Caffeine. Caffeine is again a staple of stimulant pre workouts, as it's the ingredient that gives you that energy and alert feeling that we have all come to love!

Another amino acid, L-cartinine is sometimes used as a stand alone product to help with fat loss, usually due to its's ability to increase energy.

L-Cartanine does have a number of uses and is prescribed for a huge range of different issues within the medial world.

Currently as with the L-Arganine there isn't a set dosage and everything from 1500mg - 3000mg have been noted as being useful.

Onto the 50mg of Rhodiola, actually a root extract, though not a lot of studies have been conducted, it's been suggested that it may help increase focus and energy, as well as possibly reducing stress levels (not really proven though).

So far, there is no optimal dosage.

Arginine-alpha-ketoglutarate for those who want the big names), used in supplements to increase nitric oxide product within your body, helping you get that pumped up look. Studies are still out and about on the effectiveness of AAKG, with some giving subjects 3000mgs and seeing no obvious increase in training ability.

There is nothing that screams or shouts 'Hi, I am Amazing!'.  The only ingredient that hit's its optimal dosage is Caffeine, with a number of ingredients that are either really low in dosage or there is no set optimal amount.

Depending on where you purchase this pre workout from, you can pay anywhere from £13 all the way to £23+

It's cheap, but there may be a reason for that.

I picked up the Cherry Crank flavour as a bit of a change from the cola and war heads I had been enjoying recently.

The taste, was ok. It had a bit of a peppery flavour too it, and at times a strange taste that would linger. I wouldn't say it was the best tasting pre workout, but it's not the worse.

Moving on to the important bit,  does it work?

I honestly can't say. Having tried it for about 3 weeks (and still having half a tub left) some days I would get a slight feeling of energy, other days pretty much nothing.

On more than one occasion I would double or triple dose (I know, bad idea) but still it would have the same overall effect, even at 700+mg of caffeine there was minimal feelings or obvious signs of something working.

Ultimately it was doing nothing other than giving a bit of a caffeine hit. ProPlus may actually be cheaper.

Sadly, it's not a brilliant product.

Even if it is cheap, there is an obvious reason for that, stack them high, ship them out and don't provide much substance. 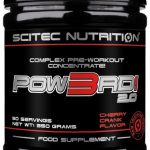