The actual ingredients profile isn't bad. You get 11 different ingredients, with the basic Caffeine, Beta Alanine and Taurine, as well as some more fun one such as HCL.

It's not a fully dosed product if you need to have 2 doses to achieve the optimal amount.

If you want a proper dose then you are going to be paying around £1.80 a dose. That's expensive.  If you only take their 'standard user' amount then it's £0.90 a serving. There are better pre workouts for the cost.

It tasted nice, but ultimately did nothing.

It looks like a well dosed pre workout, until you read the fine print and notice you need to double dose and even then there is little to no effect.

This brand and pre workout is one of a few that we got in a row from the guys over at RedSupps (they stock a lot of American brands, or supplements you can't get hold of easily within the UK). They are the same guys we got our Total War and BlackStoneLabs Dust V2 from.

This pre workout is marketed as a product that;

Take your workouts to the next level, crank the intensity up a notch (or ten) and break free from the outdated barriers of the past. It’s a new era and we’re the pioneers of breaking the molds of the past and re-defining sports nutrition.

Sometimes we get the feeling that the same guy is paid to make these pre workout descriptions.

They also claim that;

I guess it's time to see if that is the case and kraken with this review.

First off, this is one of those pre workouts, that like to show you the 2 different scoop sizes on the back of their labels. Which is frustrating.

Just have one scoop size and tell people to take that. Especially when you tell people that you are getting X amount of an ingredient, when in reality they would only get it if they where 'an advanced user'.  /rant

For this section, we will be using the 'advanced' user dosages, as that's what they are marketing and telling people they get.

You are given 16grams of core ingredients for this, with 11 different ingredients. So, we have some hope.

Straight off the bat, you can see that there are some clinically dosed ingredients in this pre workout (if you double scoop it..). Let's run through this profile and see what is working and what's filler.

First off in the Kraken PreWorkout ingredients is an ingredient we are all familiar with, L-Citrulline. It can come in different forms, some manufacuters putting in the standard L-Citrulline and others getting fancy and putting in L-Citrulline Di Malate.  You can read what the major differences, if any here.

It boils down to L-Citrulline possibly being ineffective.

Used to counter act the restricting qualities of Caffeine, and enhancing the blood flow and Nitric Oxide production.

Studies do show that at least 6,000 mg is the lower end of clinical dosages, with some stating that 8,000 mg is your optimal amount. Spartan Nutrition are a little off on that one.

Studies have shown that 3,200+ mg is the clinical dose. Hats off, they have given you a decent dose.

It has been linked with increased endurance and the 'ability to get pumped up' - Scientific terminology around here.

The suggested amount is around 700 mg - 3,000 mg to start seeing that 'pump' and seeing any extended training benefits.

Kraken have added in 2,000 mg so we agree that this is a good dosage.

Also used as a nervous system suppressant (removing that jittery feeling for you).

N-Acetyle -L-Tyrosine is usually sold as a 'concentration' supplement that may help influence adrenaline and dopamine in your brain.

Though we did find one study that reckoned having L-Tyrosine didn't actually help as a precursor for amino acids, so I guess it's still up for debate!

Actually a product within itself, Vaso6 is an ingredient of sorts, used to get you that 'pump' feeling.

Aimed at increasing nitric oxide production through the use of grape seed and green tea!

To get the full effect you need to be consuming around 300mg of Vaso 6.  Boom, right on the money.

Found within more and more pre-workouts these days, TeaCrine is like the new caffeine!

The main ingredient is theacrine, a stimulant used to give you a boost in energy.

It's been noted that you don't have such a hard 'crash' after taking it, plus it has less of an effect on your blood pressure, as well as not being so hard on your liver.

There is no defnitive optimal dosage for TeaCrine, so it's a guessing game at the moment.

Following on from those two, you have we find ourselves looking at a 250mg dose of Caffeine (in Anhydrous format). Caffeine is again a staple of stimulant pre workouts, as it's the ingredient that gives you that energy and alert feeling that we have all come to love!

We have actually started to favour the pre workouts that dose themselves with a slightly smaller amount of caffeine, as it does allow you to take a cheeky two scoop hit without having 1,000mg of caffeine smashing around your body, as that never ends well.

Better get our glasses out for this one...

Ok, let's not go too far down the rabbit hole with this ingredient.

Essentially a variation on L-Tyramine, this ingredient is added too some pre-workouts to increase insulin secretion, increase in blood pressure and and 'significantly' increase adrenegic, dopaminergic and serotonergic neurotransmitters... Good.

Some people have noted it's like a worse version of DMAA, though that's a little far fetched.

Pretty sure they are just making up words now.

Cocobuterol is another 'patented' ingredient, designed to help you burn fat.

What is the point in a pre workout...just have it as a separate product (oh wait they do)

Any way,  apart from the side fact that they are trying to make it sound like clenbuterol, cocoabuterol is a mix of natural polyphenols and alkoids taken from cocoa.

It has shown 'some' signs that it can provide the user with a boost too their energy and increase in blood flow.

Not bad to be fair, some well dosed ingredients, nothing too hard hitting and nothing that will blow your mind. With 16 grams of active ingredients it's middle of the road for dose size. Downside you need 2 scoops to really get the right dosage.

If you want to get the correct dosage for some of the ingredients, then you will be paying £38 for 20 servings, which obviously pushes that up to £1.84 a serving.

Not hugely expensive, we have paid more for our pre workout, but it's not cheap.

As we have already said, you need 2 doses to get the right amount, so it's never going to be 40 servings. That annoys us.

Taste ok, did nothing.

Can we move on?

Fine, we will add a little more!

The actual feeling was basically nothing.

We couldn't seem to notice any increase in energy, no focus, there was nothing that gave you the feeling that you where being 'stimmed up'.

We definitely did not 'take out workouts to the next level, crank up the intensity a notch (or ten) and break free from out barriers of the past'.

This was definitely more a sink than swim...

It tasted nice, but ultimately it was doing nothing other than giving a bit of a caffeine hit. You could got the same some ProPlus.

It had a cool name, some decent marketing surrounding it.

But, ultimately it was lacking.

The ingredients profile suggests you should get at least something from it, but the reality was nothing more than a red bull or two.

Not quite the 'ship sinker' we were expected.

If you want something with a little more bite, check out our StimuMax review. 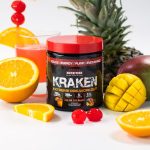