A pretty standard profile for a normal pre workout.  With 3 questionable ingredients that may or may not work.

For the ingredients that are known to work, the dosage was fine.

Stupid names, and sadly not a noticeable effect. For something with 500mg of caffeine and multiple stims, it did pretty much nothing.

If you want a mid level, £30 pre workout, then you might as well look elsewhere.  Beyond the novelty value of the tub or the fact you may know who the guy is and you feel some sense of loyalty, I would walk away.  Read more below with this full Spazmatic Review

Get Spazmatic (if you really want)

Aside from having a pretty crazy name, Spazmatic recently got recommended too me by another reviewer who had been sent a sample out. I am easily influenced, and I jump on any band wagon that I can find, especially when someone decides to give their pre workouts stupid names that any British person would cringe at, and did every time I showed them the tub.  It's time give do a Spazmatic review... seriously, Spazmatic?

First off, I should prob give a little background to the company behind this pre workout. It's run by a bloke called Tim Muriello's, you might know him from YouTube videos, such as..Yeah, I didn't know who he was, but supposedly a famous YouTube/Fitness celebrity.

I have zero clue who this guy is, and I feel like I may be missing something, so if I am missing some amazing gravy train and this guy is more famous than Gandhi, can someone let me know below?

Moving on with the actual review, the product itself is marketed as a '1 scoop is all you need pre workout', heard that a few times before *looking at you Pow3rd".

Spazmatic is a fully dose, high powered stim pre workout that gives you everything you have or have ever wanted in your pre workout drink.

Aside from the usual marketing mum-jumbo that comes on the side of these tubs, this sounds like Mr Muriello may have actually taken some time to think about what goes into this product, and may have given the ingredients some proper dosages.

Lets crack on with this review and see how good this stuff is.

With 9 main ingredients, and 4 vits and minerals packed into this product, it again sounds like we may be onto a winning product. The total dosage size is 11.7grams (so specific..), with plenty of warnings stating that 1 is optimal, never go over 1, going over 1 will basically end the world.

So I had 2 on regular occasions.

Oh, and of course, they are thrown into cute little blends such as Total Spaz Energy Squad.

Give me strength, this review is going to kill me.

Who comes up with these names? A 5 year old kid?

Let's look at the doses per ingredients before I lose the will to live.

So there you have it, 3 different blend names, each as stupid as the one before!

The actual ingredients list here, is quite good, with some decent dosages, I cannot fault them on that, so let's have a quick check through the different ingredients.

Shall we start with 'Total Spaz Energy Squad'.

Seriously, some one is just pulling my leg with these names!

Recommended dosage for Taurine sits at 1,000mg, so twice the standard dose, this is going well!

Coming in at a total of 500mg of caffeine in this pre workout,  with some coming from Green Tea, for 'slow release'  and the rest hitting you with that 'quick release straight to your face' stuff.

500mg is a nice hit, but does give the impression that the main stim in this pre workout, will be the Caffeine and potentially not much else, a bit like Black Blood, but lets persevere and see.

A new one for the Stim Junkie blog, but the properties and the reasons have been seen before.

The NPDC has been added to try and give the same hit as DMHA or DMAA, but supposedly quicker and faster acting than DMHA.

According to the blurb it is also useful for reducing anxiety and burning fat, but I couldn't find anything to back it up, so for now.. I am going for new hot ingredient that may or may not be useful.

To finish off the 'stim stack' coming in at 30mgs each you have Higenamine & Hordenine.

Both of these are again fairly new ingredients along with bitter orange or Synephrine designed to mimic or replicate the effects of Epherdine or DMAA.

Both are meant to increase altertness, increase energy reserves, focus your mind and also stimulate you.

Again, as with Bitter Orange & Synephrine, the jury is out on wether these work.

With some users noting that it's the best thing since sliced bread and others stating that they offer no noticeable benefit.

This one is going to have to sit on the side line with NPDC.

Not the first and it wont be the last time we see Tyrosine, added to pre workouts to help with alertness, as well as increasing stamina and general performance.

There is a huge dose within this pre workout, much more than the 100 - 500mg I have found have been shown to work, so Tim has given a lot over to this still unknown ingredient.

Currently little, to no evidence that this is effective across single workouts, though I found one paper that stated it had been used in a study for Alzheimers and may help improve memory.

The marketing department need to be fired.

4.5grams is getting into that good dosage realm, so again I will give them this.

As with Tyrosine, this ingredient has started to appear in pre workouts instead of Beta Alinine, or other ingredients designed to get that 'oxygen flowing'.

An amino acid, it's shown to increase blood flow and aids in the recovery from workouts.

As of Feb 2019, it's currently under scrutiny  for causing potential damage to your brain.

I am going to skip this for now.

Right, there you have it. 3 stupid names, but the ingredient themselves look to be fairly well dosed, with 3 questionable or lacking in evidence ingredients.

I'm on the fence. The staple ingredients are well dosed, but there are also a few ingredients that are unknown, or haven't had enough research to show if they are effective.

It's not a bad price, but you can get better for £30 with more researched ingredients.

This time around I went for Watermelon!

I got it around the same time as the Charge, so I must have been in a Watermelon kinda mood.

It doesn't taste too bad, and it's basically like any type of fake chemical Watermelon.

Moving onto how it made me feel.

Well it didn't make me feel warm and fuzzy, there was no paper, pair of my favourite slippers and a pipe when I walked into the gym.

It was more a 'overwhelming feeling of nothingness', a bit like the brain of the marketing person who came up with these names!

It had very little effect. Even at 1,000mg of Caffeine, there was a very faint buzz. Like someone had left an old Nokia on in your gym bag but had left it on vibrate...but the battery where dying.

Either I got a dud tub, or this stuff isn't being 100% truthful with what it's got inside.

They taste ok, but the overall effect is some what lacking.

I originally got it because of good old fashioned advertising and my longing for acceptance and...erm I mean, because curiosity got the better of me.

The tub looked cool and I wanted to see if this was some kind of joke with its name.

And it seems I was right, it's a £30 tub of joke. Go get something like Stim Max Pro or Alpha Darkside if you are after some heavy hit stim pre workouts.

And that's it, you have reached the end of this Spazmatic Review.  Seriously...that name. 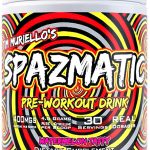