A simple, effective ingredients profile, with staple 'stims' as well as some more fun ones to play with.

All ingredients are dosed as they should be. Full clinical doses.

Pretty much the standard price for a pre workout, coming in at £1 per dose.

The only problem I had, was the flavour. After a while it got tiresome and a bit sickly. But the feeling, abosolutely awesome.

A fully dosed, simple pre-workout that promises to give you something a little extra for your workouts. It can't be faulted. Similar preworkouts sell for a lot more, so for just £30ish you cannot go wrong.

Update: Strom Sports recently updated their StimuMax Pro (and standard) so we will be updating this review with the new ingredients profile as soon as we get it.

Finally, we got around too writing up this review, and we are massively excited in being able to.

Because it's a pre-workout that has been formulated by someone who looks to know what he is on about, and in the supplement game that can be a difficult thing to find!

We actually found the Strom Sports guys around the time we where finishing up the Kraken Pre Workout, so we where after something that might actually work.

In strides in Strom Sports with their huge swinging maracas with a pretty down to earth Instagram post about something they called StimuMax Pro (v2 technically now).

With only 6 ingredients and a 30 servings per tub, it was time to see what this stuff was made of.

StimuMax Pro has 6 ingredients, with a serving size being around 12 grams or so (10.9 grams of active ingredients).

For a product that has the name StimuMax you would be expecting a huge serving of caffeine, but as you will see below, that's not the case.

If you want to hear the ingredients list straight from the horses mouth, then check out this video video.

As you can see, that's 6 ingredients. Nothing more, nothing less.

So let's look at each of them and see what they are meant to do and what their dosage is like.

Citrulline Malate have both been shown to increased your Nitric Oxide and enhancing your blood flow - Massively needed if you are having high doses of Caffeine. Strom has added in 6,000mg. That is a full clinical dose.

Unless you are used to Beta Alanine, you will get a lovely tingling feeling (think of ants..over your body). Studies have shown that 3,200+ mg is the clinical dose, so this pre workout again gives you a clinical dose.

Next up you have N-Acetyle -L-Tyrosine coming in with a 1,000 mg dose. N-Acetyle -L-Tyrosine is usually sold as a 'concentration' supplement that may help influence adrenaline and dopamine in your brain. Though we did find one study that reckoned having L-Tyrosine didn't actually help as a precursor for amino acids, so I guess it's still up for debate! She Is Wearing A Lab Coat, So She Must Know What's Happening

The guys over at Nootropedia link through too a few studies suggesting that at least 350mg can start having a positive effect on your mood and concentration.

A new one for the Stim Junkies, is Alpha-GPC or Alpha-Glyceryl Phosphoryl Choline if we want to bring the lady in the lab-coat back again.

Another nootropic, it's been linked to improvements in memory (it's currently being trialled with patients who suffer from Alzeimers and Dementia, so exciting times).

Due to being a fairly new, we couldn't find a lot of studies or papers,  but as we just said researchers are trying to see if Alpha GPC is an effective drug to help with memory and cognitive skills!

There is no recommended dosage at the moment, so we will accept whatever Strom Sports have put into this pre workout for the time being!

This ingredient is the one that make it different from their normal StimuMax.

It's worth noting, that some users have said that Alpha GPC can improve cognitive function, improve alertness and overall 'focus' when taken.

The staple to pre workouts is next, is the good ol' Caffeine! Not too highly dosed, at only 250mg (considering I have seen and had pre workouts with 400 - 500mg per dose) it does allow you to have that 1 .5- 2 scoop dose without smashing through the 'my stomach feels like crap' stage when you start hitting the 500 - 1000mg of caffeine.

It's not recommended by the way, even if you are a Stim Junkie.

Updated - Finally, another new one for us, is 4-Amino-2-Methylpentane Citrate or AMP Citrate. We are getting the feeling that Strom really like supplements with the worlds longest names!

You will need to be careful taking this if you are a tested athlete as some federations have banned this ingredient. It was added to pre-workouts to replaced the good ol' DMAA (which we all know is pretty much banned everywhere - boo!). AMP Citrate is a short acting stimulant, designed to give you a TON of energy and focus, but in a really short amount of time.

People report that it provides a much cleaner 'come down' rather than the usual smash back to the ground that Caffeine can give you!

It's worth noting that 4-Amino-2-Methylpentane Citrate may not be around for much longer, depending on if governments decide it's just too close to DMAA. Keep your eyes peeled for a potential update to the formula.

Updated - 4-Amino-2-Methylpentane Citrate has actually been removed from StimuMax Pro V2 (and StimuMax) and a new formula has now been dropped.

We will be creating a new review for StimuMax Pro V2 and StimuMax V2.

It's clinically dosed, what more could you ask for? It's got some nootropics and cheeky little number designed to help with energy!

For a 30 serving tub, that's basically £1 a serving, which is around the halfway mark for pre-workouts these days, but actually a really good price for a pre-workout with nootropics in.

Considering it's clinically dosed and the price is mid range for prewokouts, I'd say that's a good deal!

So for this review, I picked up the Strawberry Kiwi (and odd flavour to be fair).

It is a slightly bitter taste, though that might be the Kiwi coming through!

We didn't hate the flavour, but after 20 odd servings, I was getting a little fed up of the taste if I am honest.

How did it make us feel?

We usually start out with a single scoop, as per instructed.

We did get a good feeling from it,  and we did feel that focus that Strom have said you will get from their pre workout.

Did it get us feeling 'energetic as hell'?

Not quite, but you do start to feel like you are finding more reps and energy out of nowhere, whch is where the quick acting AMP Citrate is kicking in.

You will also get that 'I have been touched by a thousand ants' feeling due to the full clinical dose of Beta Alanine.

We will admit that we usually had 1.5 - 2 scoops to get us through the workouts, but that's more down to being desensitised to caffeine at that time (you should really take a good week or two off it every now and then), so next time the standard scoop should be more than enough!

The flavour got a little bit tiresome, and wasn't a huge fan of it, but the overall feeling was really good.

This is a solid pre-workout from a pretty unknown company (sorry!).

It has been created by someone who knows how to clinically dose his products and knows a lot about the supplement industry and supplements in general.

Considering Rick likes to post up short videos on Instagram and let people know what's inside his products and why, plus giving reasoning behind the dosages, it's fair to say you are going to get a good all round product from him.

If you haven't checked StimuMax Pro out, or you have never heard of Strom Sports, we recommended giving them a visit or some love on social media (And let them know we sent you!) 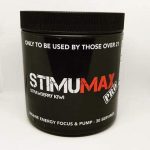