Some staple ingredients such as Taurine, Beta Alanine and Caffeine.

Caffeine is the main stimulant and is dosed correctly. The rest falls short of the mark.

Tastes really nice and you do get some results from it, but farm from the hype.

A cheap pre workout that does taste really nice. You get a good dose of caffeine, but pretty much under-dosed on everything else. One for the emergency backup cupboard.

One of the first products I ever tried from the guys at BodyBuildingWarehouse, Warrior Rage has gone through a number of iterations and from what I can tell the formula has changed at least 2 or 3 times.

Warrior Rage is billed as

The world's strongest pre-workout is back and better than ever! Warrior RAGE is one of the most powerful, most effective, and most results driven pre-workouts on the market, and now, it's even better value.

For those who have read other posts I have written, you will know just how much I love a nice level headed marketing claim that doesn't proclaim to essentially be the dogs bollocks. O wait.

This pre workout used to be their premium pre workout, and would sell for around £25 - £30 a tub, but these days it looks to have dropped dramatically in price and you can pick it up for as little as £14. Much like their lesser known but equally as cheap Charge, this pre workout should not be seen as 'premium'.

I have wanted to review this for a while since I first tried it a while back, so let's give it a bit of a review and see how good, or bad it is.

Quick Navigation
Ingredients - What's Inside?
Sp3cial Blend
Pricing (Plus Price Per Serving)
How Does It Taste And Feel?
Final Verdict

As with the Performance Charge, the ingredients profile at a high level looks semi decent.

As you will see below, it contains caffeine, Beta Alanine and all nicely put into prop blends.

I still don't fully understand why in 2019 companies still do this.

Unlike KFC, it's not a secret blend of herbs and spices, it's some standard ingredients that should be dosed at an optimal amount and throwing it all into a blend just makes you look shady.

Now, this pre workout does provide you with the individual doses, so it's more a marketing tactic using phrases like 'endur strength synergetic complex'... ugh WHY! Again it's 2019 companies don't need to use buzz words, customers are a bit wiser these days.

Just throw your ingredients on the back and be done with it.

Much like it's brother Performance Charge, this pre workout contains a lot of the same ingredients.

This one has a higher Caffeine  at 300mg,  but a lower amount of AAKG and the removal of the Bitter Orange so it will be interesting too see what kick you get from this.

As with Charge,  the Creatine gets me ranty  I have always personally argued that it doesn't make a lot of sense in pre workouts and should be left as a stand alone product, or added to a product you take everyday such as Ghost's new Size or Team Affinity PowerUP!

Both provide you with your 5g of creatine a day plus Beta Alanine to start soaking your muscles (creatine and beta both work by building up levels within your body) and ensures you are getting those optimal levels everyday, unlike a pre workout that you take when you are flagging or want to smash something!

It's just used as a cheap filler to bulk the ingredients profile.

A creatine molecule that has been atached to a good old glucose molecule, designed to increase absorption within your muscle.

Once a build up has been developed it can help with short term and high intensity workouts.

Studies have shown that 3,200+ mg is the clinical dose. You have a half dose (better start double scooping!)

Not a lot you can say about BCAA's. They are amino acids found within your body, usually managed through your diet.

Currently there is zero, or at least very little evidence that powered form BCAA's are any use and even less evidence that they help with energy or are good ingredients for pre workouts.

It sounds like an awful fitness class that you try and avoid.

The majority of the actual useful ingredients are held in this 'power ranger' style blend, let's see if it will morph you into a legend.

Arginine-alpha-ketoglutarate is added primarily as a 'pump' ingredient or added to counter caffeine, due to it's potential ability to produce nitric oxide thus increasing blood flow.

As I mentioned with other reviews, there is currently a debate about if L-Arganine or L-Citruline is better for this, but that's a little too in depth for such a jovial blog!

Studies are still out and about on the effectiveness of AAKG, with some giving subjects 3000mgs and seeing no obvious increase in training ability.

It has been shown to increased your Nitric Oxide and enhancing your blood flow - Massively needed if you are having high doses of Caffeine.

6,000mg is classed as the full clinical dose, they where close with this one.

Also used as a nervous system suppressant (removing that jittery feeling for you). Some studies recommend that 1,000 mg is around the correct dosage.

Pretty much last on the list, minus the vitamins, Warrior Rage gives you a nice 300 mg dose of Caffeine, being the main stimulant found within this pre workout, or arguably the only stimulant.

A double scoop will obviously get you closer to the optimal dosages for other ingredients but will start to get you into the higher end of what you should consume in single hits of caffeine.

Caffiene is dosed at a a really good level and you will definitely tell it's in there, but still under dosed on the other ingredients. As with charge, you will need to double scoop to get the correct dosages, and that means 600mg of caffeine (not the best plan)

Depending on where you purchase this pre workout from, you can pay anywhere from £13.99 - £20.

I got myself a tub of the Lightin' Lemonade because I like finding pre workouts that have a different flavour profile and are not your standard flavours such as berry, apple or cherry.

A really nice flavour profile, it's a refreshing taste and you could even pretend you where enjoying a nice lemonade on a hot day.

So it tastes nice, but is it a 'weapon'.

The majority of the time 1.5 scoops or a slightly more dangerous 2 scoop was needed, but you did get a slight tingling from the Beta Alanine and again an obvious hit from the Caffeine.

Was it the stronger pre workout ever and was it the most effective, results driven pre workout?

No, not even close.

You got the tingle from the beta alanine and an obvious hit from caffeine, but no sharp focus or furious workouts where finished while having this product.

As with the charge, I am torn.

You are basically paying £0.30 for some caffeine and a few more under dosed ingredients, that tastes quite nice.

It doesn't come close to any of the marketing claims, and that's definitively a theme with BodyBuildingWarehouse and their products.

They love to have big bold claims, but again they haven't delivered.

If they had marketed it as a 'cheap pre workout that will give you a tiny kick' then I wouldn't have any issues...but claiming it's the best thing since sliced bread.... And it simply isn't. It's a semi decent cheap pre workout that I would keep in a cupboard and use it if I had nothing else. 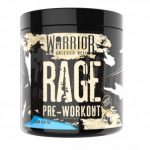